Over the years, I’ve come to appreciate the value of connecting with people. The threads of the lives of others, running back and forth through the threads of our own lives, serve to create a fabric of strength and elasticity.

One such experience was set in place when, as a child, I signed up to be a member of the 4-H club. Then I realized joining meant participating, which meant I needed to select a project from one of the categories. For me, the choices narrowed down to cooking or sewing. I chose sewing since the idea of new clothes appealed to me. Immediately, though, some obstacles became apparent. My mother did not sew and, therefore, our family did not own a sewing machine. Minor details, like not having an instructor or the means, never entered my mind when I checked the little box by the word “sewing” on the 4-H application.

My mother could have reprimanded me by asking, “What were you thinking!?” But, instead, she said, “There’s more than one way to skin a cat.”

(My mother colored her speech with expressions. “Every dog has his day,” “A bird in the hand is worth two in the bush,” and “A rolling stone gathers no moss” are but a few of the many gems that gave me a love for words and became one of the tools that I use in my fondness for writing.)

The cat was skinned with an idea my mother had: I could sew at my aunt’s house on Sunday afternoons. This aunt never married, so her life and home were open to invasion from her pubescent niece. My aunt blossomed in the experience. I’d show up to find she had purchased yards of fabric: three yards of tiny blue and pink daisies on a cream field, four yards of bright green and bold peach flowers on a soft green background, two yards each of blue, yellow and lilac. My aunt’s house became my fabric store. I was seriously okay with her selections. I could tell she was having fun and the idea of sewing was already beginning to settle into my spirit, even as it was declaring: “This is not a fit for you.” But, I was committed to the club and now I was committed to my aunt. 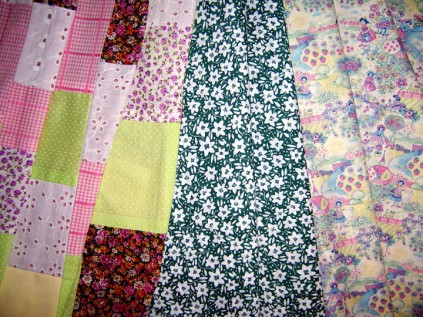 I sewed, and then ripped out what I had sewn with an intriguing little instrument called a seam ripper. Finally, in order to move the project forward, my aunt said, “Well, maybe it’s good enough.” Under these agonizing circumstances we “whipped out” an apron when I was ten years old, a skirt when I was eleven, and a blouse when I was twelve. The apron, like those potholders made of loops, endured in the family for decades. The skirt and blouse were worn once or twice, and then I conveniently outgrew them.

I remember the last day of our three-year run. It was a Sunday in April and my aunt’s green walls were being painted gray by the late afternoon’s pink sun. My aunt turned off the sewing machine and turned to me. “Let’s go get a cookie to celebrate all you have achieved,” she declared.

What had I achieved? One apron, one skirt, one blouse, but, more important, I had connected with a dear aunt and with the club, as my projects won third, second and honorable mention ribbons.

I am thankful for the connection I have had with my mother through her expressions that live on as part of a colorful tapestry in the fabric of my life.

2 thoughts on “THREADS of LIFE: Expressions and Experiences”